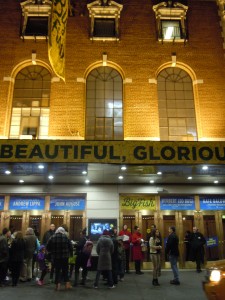 As the sign says, Foster Your Dream was invited to see BIG FISH, the MUSICAL and it was BEAUTIFUL and GLORIOUS!  90 happy and lucky children got to take in the Broadway Show on a Saturday Night!

The singing and dancing and story were the favorite parts for the children.  One little girl announced her favorite was the Mermaid.  For the adults the amazing performances (some will probably garner a Tony Award) the sets and the poignant story brought us to tears!

As usual, we can not show you the faces of the children until we get permission, but while we were waiting outside it began to snow and I snapped a few stealthy photos while the children were enchanted by the first falling flakes of the season. 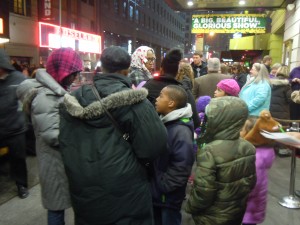 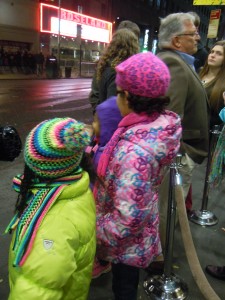 Darrell Williams and Deidra Sutton lead the way for ACS while Sue Wolf and Sarahbeth Grossman and Donald Yonker volunteered to greet and organize the groups as they arrived.  We will update this post with more information but the Bronx and Queens were handsomely represented in this magical outing! 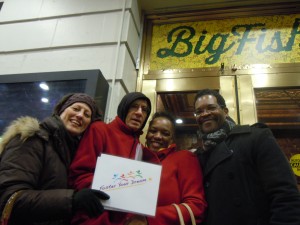 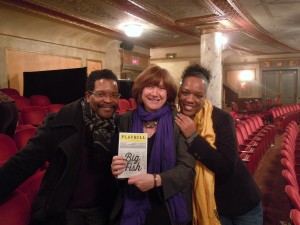 Many thanks to all who donated money, tickets, time and energy.  Katie Pope and Heidi Neven you were angels to make this happen. As was Sean (house manager) and the box office staff!  To the Producers and the Cast and Crew and Orchestra we say  “the show was AMAZING and we all had the BEST TIME!  THANK YOU!”~ Sue Wolf Founder