YOU SOUND LIKE A GIRL started by our dear friend from the Signature Theatre Days, Colleen Hughes, brought her amazing show to the ACS Theatre! There was a cast of 5 amazing she/her/hers identifying actors who shared very personal stories for an hour at the Children’s Center.

Thanks to all the amazing performers.

Colleen E. Hughes(she/her/hers) is a Brooklyn based director and arts administrator, and creator of You Sound Like a Girl. Her select directing credits include, What Screams I Hear are Mine by Annalise Cain (reading, The Tribe Theatre Company), The Shapes We Make With Our Bodies by Meg Whiteford (The Hive), Jelly Bean Junkyard by Sean Pollock (Under St. Marks), Chatroom by Enda Walsh (The Hive), Let Them Eat Cake by Ted Malawer (TinyRhino), and Disco Pigs by Enda Walsh (A.R.T.’s Oberon). Her assisting credits include 12th Night by William Shakespeare, directed by Shira Millikowsky (A.R.T. Institute) and Death of a Salesman by Arthur Miller, directed by Phil Soltanoff (Skidmore College). Colleen studied directing at the National Theatre Institute at the Eugene O’Neill Theater Center and theater at Skidmore College. www.colleenehughes.com

Sara Jane Munford(she/her/hers) is a multimedia performance artist, designer and puppeteer based in Brooklyn, New York. She is the resident set designer and puppet captain of Little Did Productions. Currently, Sara Jane is working on birth/control/project, a community based art making process and art installation intended to create a space to empower female identifying participants in the pursuit of autonomy over their bodies. For more information please email sarajane.munford@gmail.com.

Alessandra Ruiz(she/her/hers) is a NY Latina actress who moved from Los Angeles this January. She graduated from California State University, Fullerton with a B.A. in Theatre Arts with an emphasis in Devised/Physical Theatre. She begun her NYC debuts working with projects performed at the Gene Frankel Theatre and St. Paul’s Lutheran Church. She wants to use theatre to open up minds and hearts for a better understanding society. Alessandra believes theatre is a powerful art form that can truly help make a change. Alessandra is very excited to be creating with the “”You Sound Like a Girl”” cast and crew and hopes to empower women everywhere. www.alessandraruiz.com

Alexandria Joesica Smalls(she/her/hers) is an actor, writer and director who hails from Brooklyn, NY. She has an AS in theater from BMCC and a BA in Drama and Africana Studies with a focus on Prison Studies. She is an activist with a passion for social justice issues and uses her creative work to explore difficult conversations on topics such as race, economic inequality, and education.

Rev. Yolanda(she/her/hers) is a singer/songwriter/trans-femme genderqueer performance artist and interfaith minister, originally from Muscle Shoals Alabama- The Hit Recording Capital Of The World. Rev. Yolanda and husband Rev. Glen Ganaway are the founders of the monthly “spiritual happening” Church With A 2 Drink Minimum. Rev. Yolanda’s ministry and body of musical work has been captured on film by Avaiya Media with the movie “”Rev. Yolanda’s Old Time Gospel Hour”” (available on Amazon), and has been honored with induction into the The GLBT Hall Of Fame, the Blues Hall of Fame, and two MAC Awards. (MAC-Manhattan Association of Cabarets and Clubs). Rev. Yolanda is currently working on a full length, autobiographical musical theater piece entitled “The Church Of The Alien Love Child Presents: The Passion of Rev. Yolanda.”

Emily Rose Prats(she/her/hers) came to NY more than a decade ago to get her BFA in Drama from NYU/Tisch. Since then, she’s produced an EP, performed Shakespeare, voiced commercials, taught music to children, and now works in marketing for startups. She believes in theatre as a teaching tool and hopes You Sound Like a Girl can empower women and girls to stop internalizing misogyny and make themselves heard. Follow her adventures on insta @the_gremily and/or offer to publish her children’s book.Rachel Levens(she/her/hers) is a Brooklyn based new play director, dramaturg, and applied theater artist. Rachel’s directing has been seen at La MaMa, Edinburgh Fringe Festival, United Solo, The Tank, Dixon Place, Hudson Guild, and The International Human Rights Festival at The Wild Project. Her dramaturgy work has ranged from production dramaturgy, new play development, literature performance, and dance dramaturgy. She is the resident dramaturg for The Holding Project, a dance company based in Portland, Oregon. Rachel holds a BFA in Theater with an emphasis in Original Works from Cornish College of the Arts in Seattle, WA.

Thanks to the Hope-a-holics we were able to send 38 young people to see GLORIA: A life! 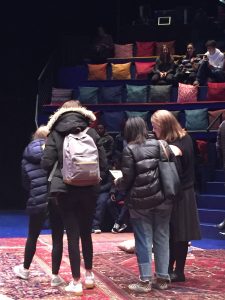 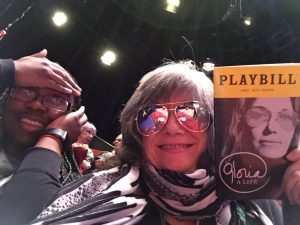 Every show invites a celebrity or two and Gloria herself has been known to show up!  One of our matinee groups got to see Karlie Klaus the super-model.  She’s super tall and was super kind in talking to everyone in the audience who wanted to!  She even allowed some selfies.  Obviously those two women below are not foster kids!  But you get the picture!  🙂 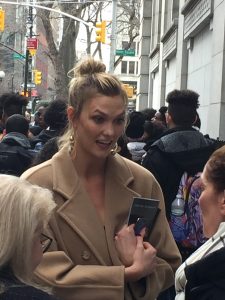 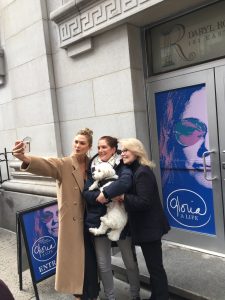 SpongeBob SquarePants, Head Over Heels and Choir Boy invited us to join them for their shows and then for a magical backstage tour! 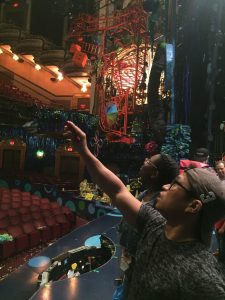 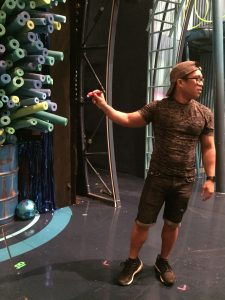 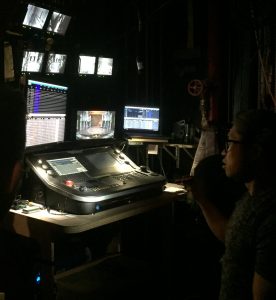 Brooke Smith arranged for Lou Castro the assistant Choreographer of Sponge Bob Square Pants to give us an in depth look at all the amazing things backstage at the Palace Theatre! He showed up props, wardrobe and al the fantastical technology! 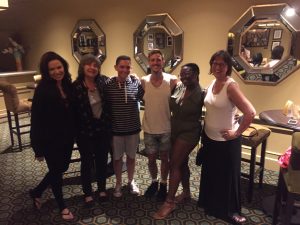 Julie Boardman & Sarahbeth Grossman welcome us to the Green Room!

HEAD OVER HEELS producers Sarahbeth Grossman, who has been a supporter of Foster Your Dream kids for the past 10 years, took us to their green room and introduced us to producer Julie Boardman.  We were allowed to ask questions and feel like a VIP! 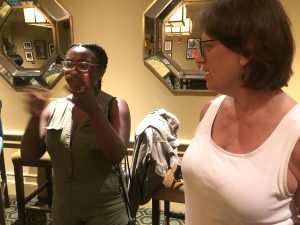 As usual, I can only show emancipated foster children who are OK with our taking their photo or with guardian consent.  That’s why you tend to see the same few kids … they are the ones who are enamored by all things THEATRE!  The one below has a particular connection to theatre and FYD’s mentorship has been sort of like a rag-tag theatre fellowship.  So enjoy her joy! 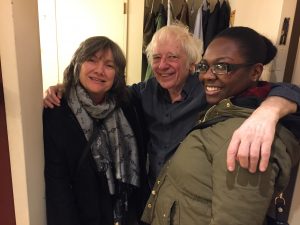 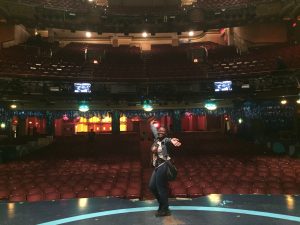 When a young budding actress who has lived most of her life in foster care sees St. Joan on Broadway starring Condola Rashad and says “Oh!  She looks like me! I could do that!” it gives us another reason for urgency to have full representation in entertainment! 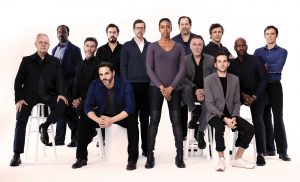 Not only was Ms. Rashad brilliant but she was kind and generous with her time after the show. 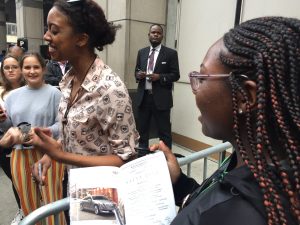 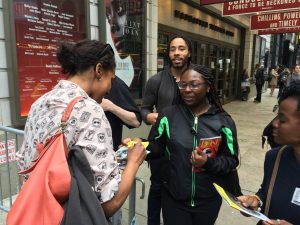 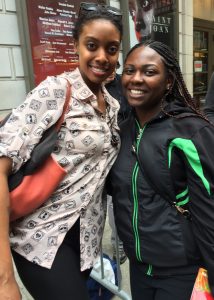 I’m going to keep this young actress’ name private here but some day you will see her in the arts, either on stage or behind the scenes. 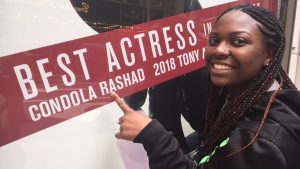 She went to see Ms. Rashad perform twice with two different FYD mentors because it is rare that we see people who represent our #fostercare population in such a unique and inspiring way on Broadway. Thank you, Ms. Rashad from all of us at Foster Your Dream! 🙂  A wonderful time was had by all! 🙂 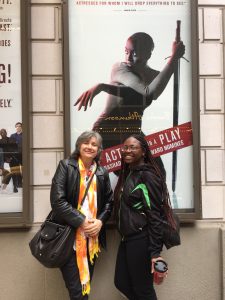 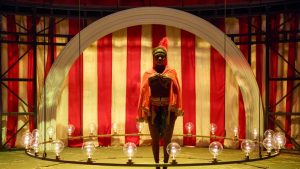 Based on a true story about Sara Baartman, an African Woman who was enslaved because of her beautiful booty, Venus of Hottentot wowed several small groups of foster children who had never been to the theatre! 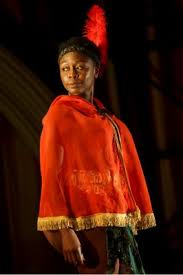 Susan Lori Parks, a brilliant African American Female writer, chose to focus on a strong figure in history to illuminate in her play off-broadway.  Our kids felt empowered at the end after experiencing all of her trials and tribulations in living technicolor! 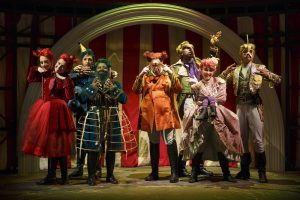 As the curtain went down in that moment just before the applause starts, the 16 year old sitting next to me said in a soft voice “w o w !”  That kind of reaction makes all our slow-going hard work worthwhile. 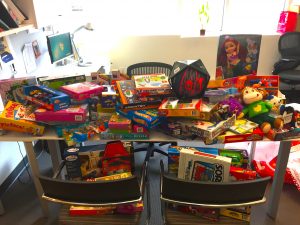 Our first ever Holiday Toy Drive was such a success!

When a child gets pulled from their dangerous living situation they often get  placed in the Children’s Center while waiting for a foster home. They are scared and sad. We decided to give them a few minutes of distraction and hopefully happiness by letting them choose a toy and bring it with them to their new home.

How did this start? 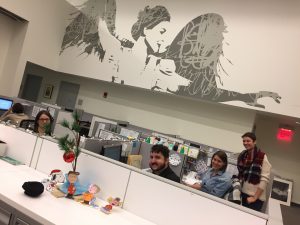 The angels at the Signature Theatre organized the first one for us. 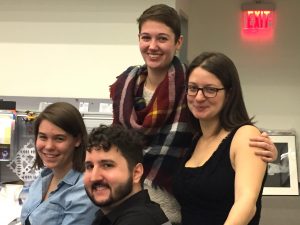 It started with a bin…. 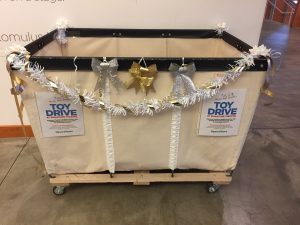 …and a few toys from patrons and staff … 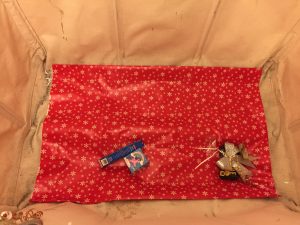 … and bloomed in to a wonderful experience and inventory fun.  Many thanks to Colleen Hughes and ACS! 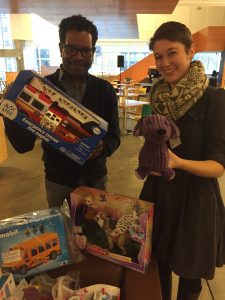 Then another surprise happened as Nancy Sing Bock from neighboring PS51 brought over a group of students with a load of toys!  Ms. Bock had walked by the Signature theatre many times on her way to her school and one day saw the sign for the FYD Toy Drive. She wanted her children to understand service and ‘giving’ first hand so they organized their very own toy drive!  Literally the day before everyone scattered for the holidays, this group came by with yet another load of toys and the Signature staff and FYD was in happy and humble shock. 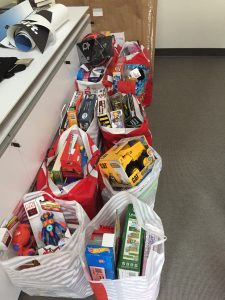 THANK YOU TO ALL AND LET’S KEEP THE TOYS COMING! CONTACT ME TO FIND OUT HOW TO DONATE TOYS TO US!  sue wolf at foster your dream dot org (all smushed together!)